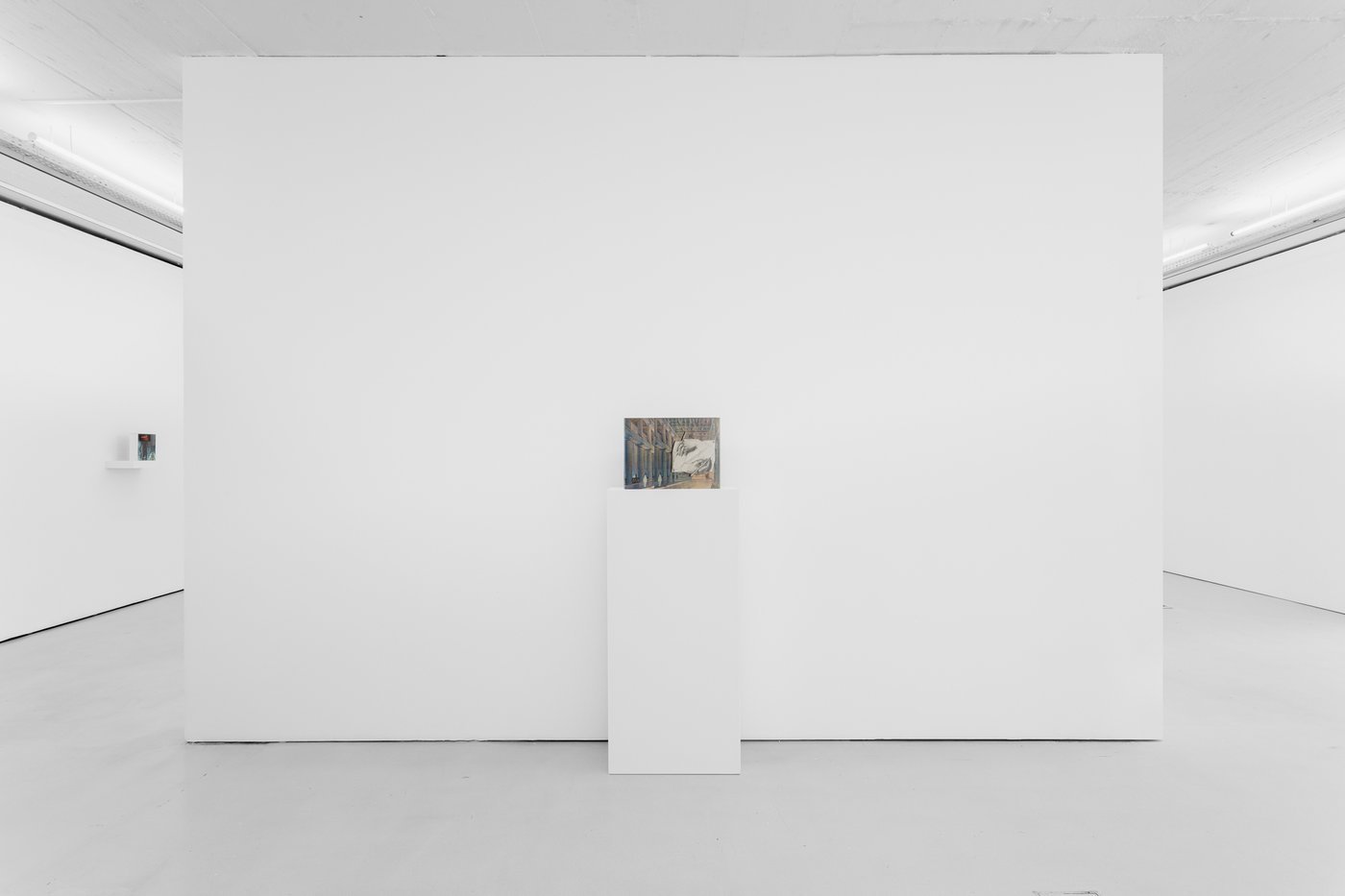 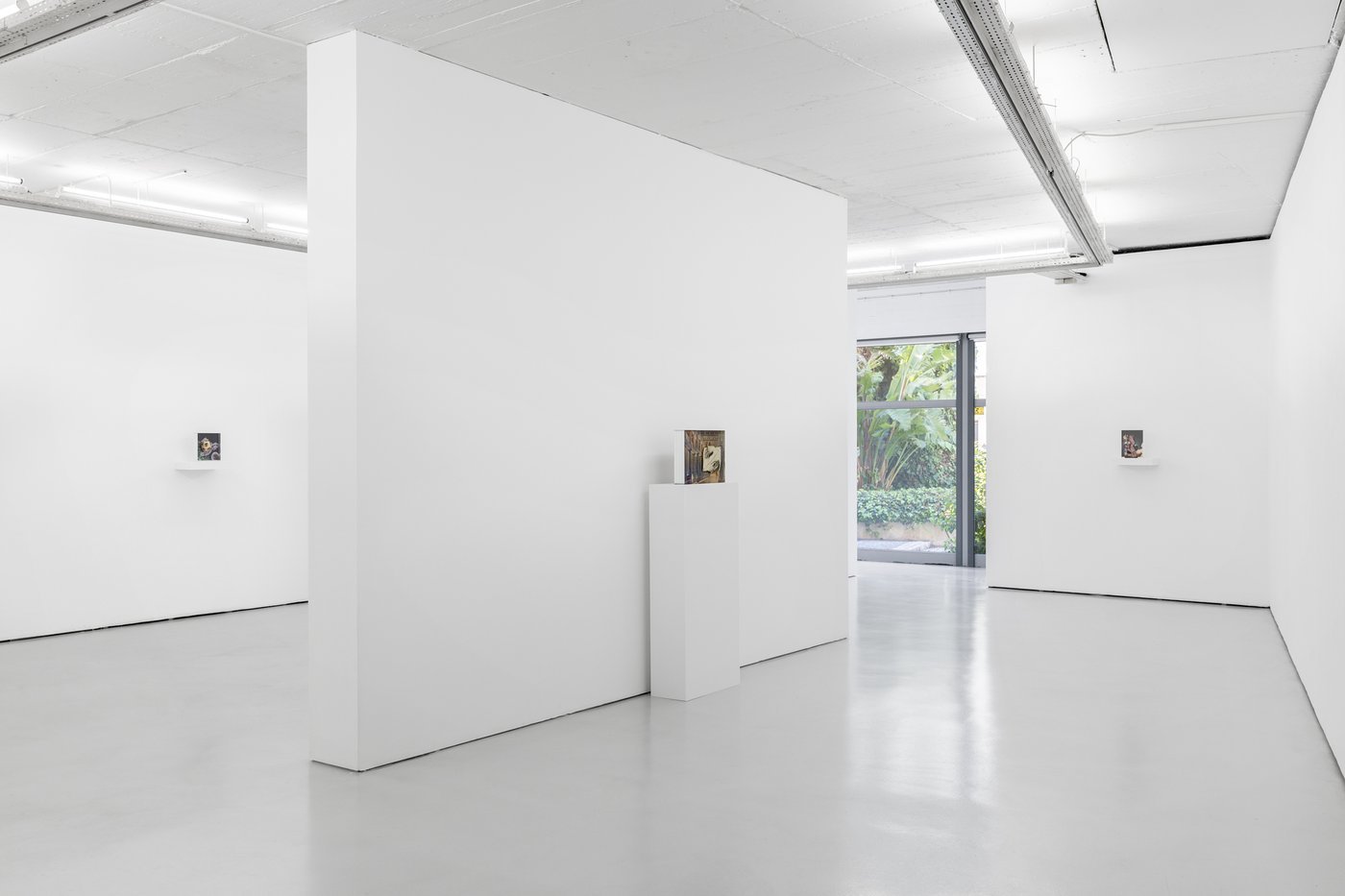 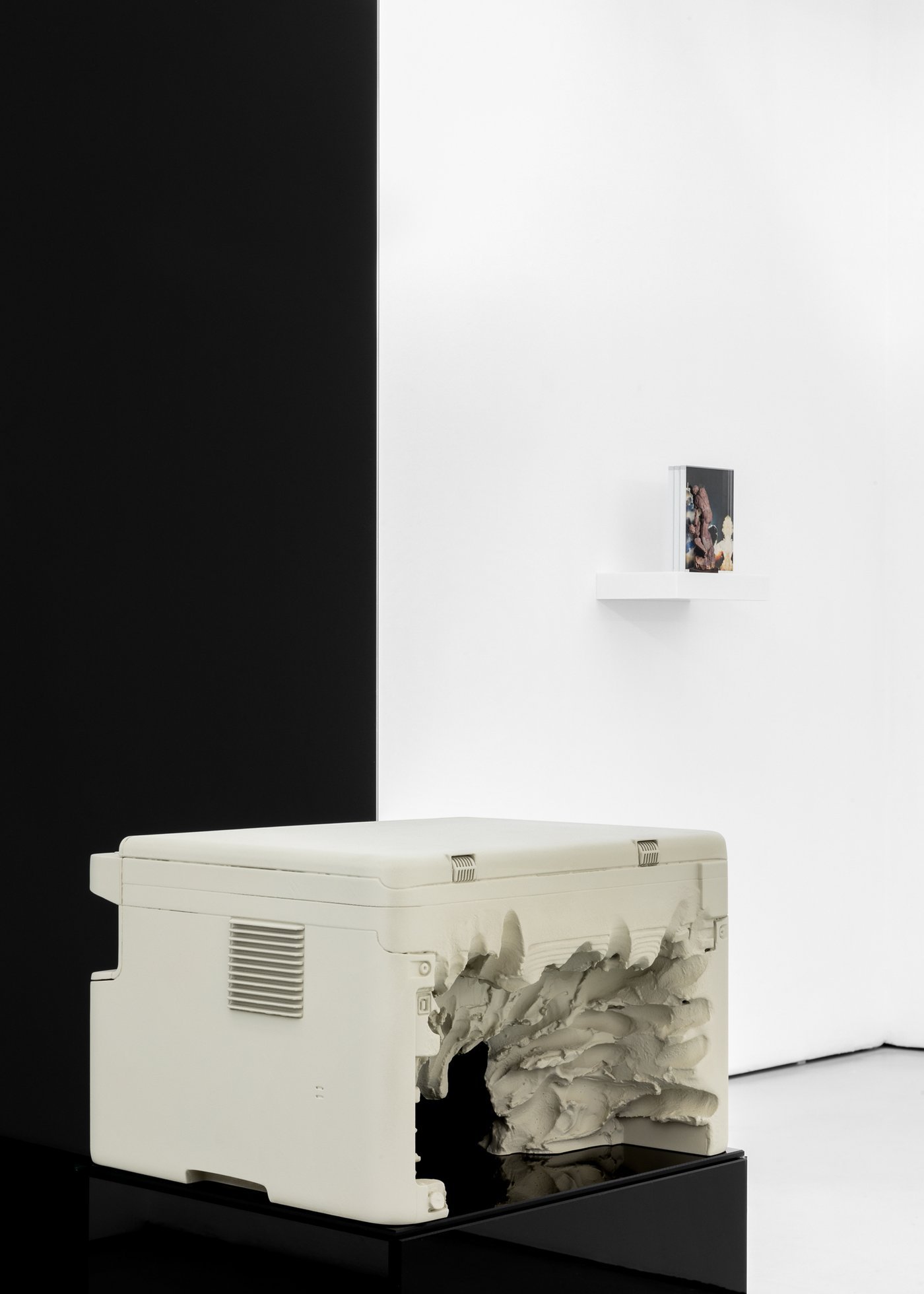 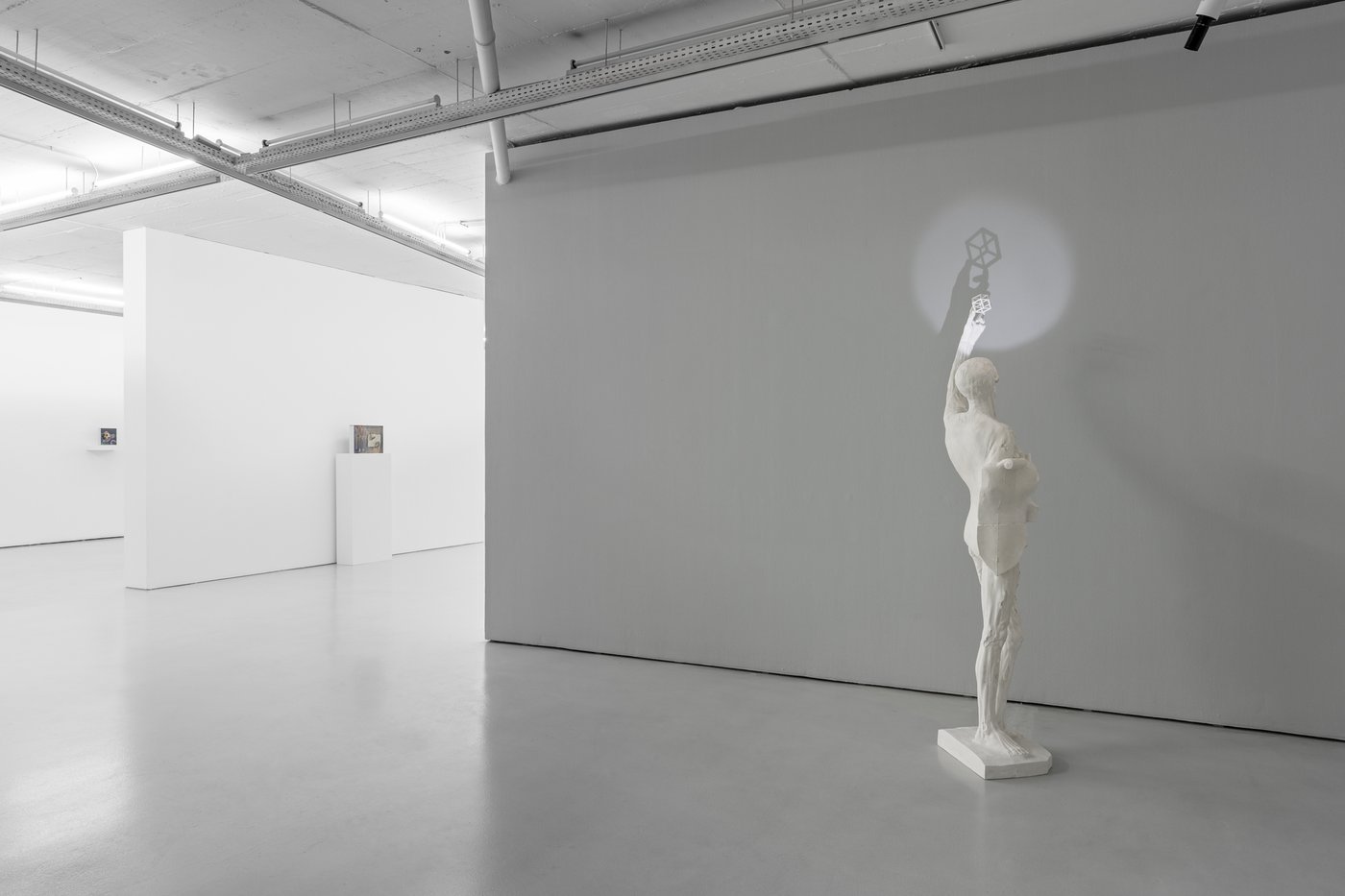 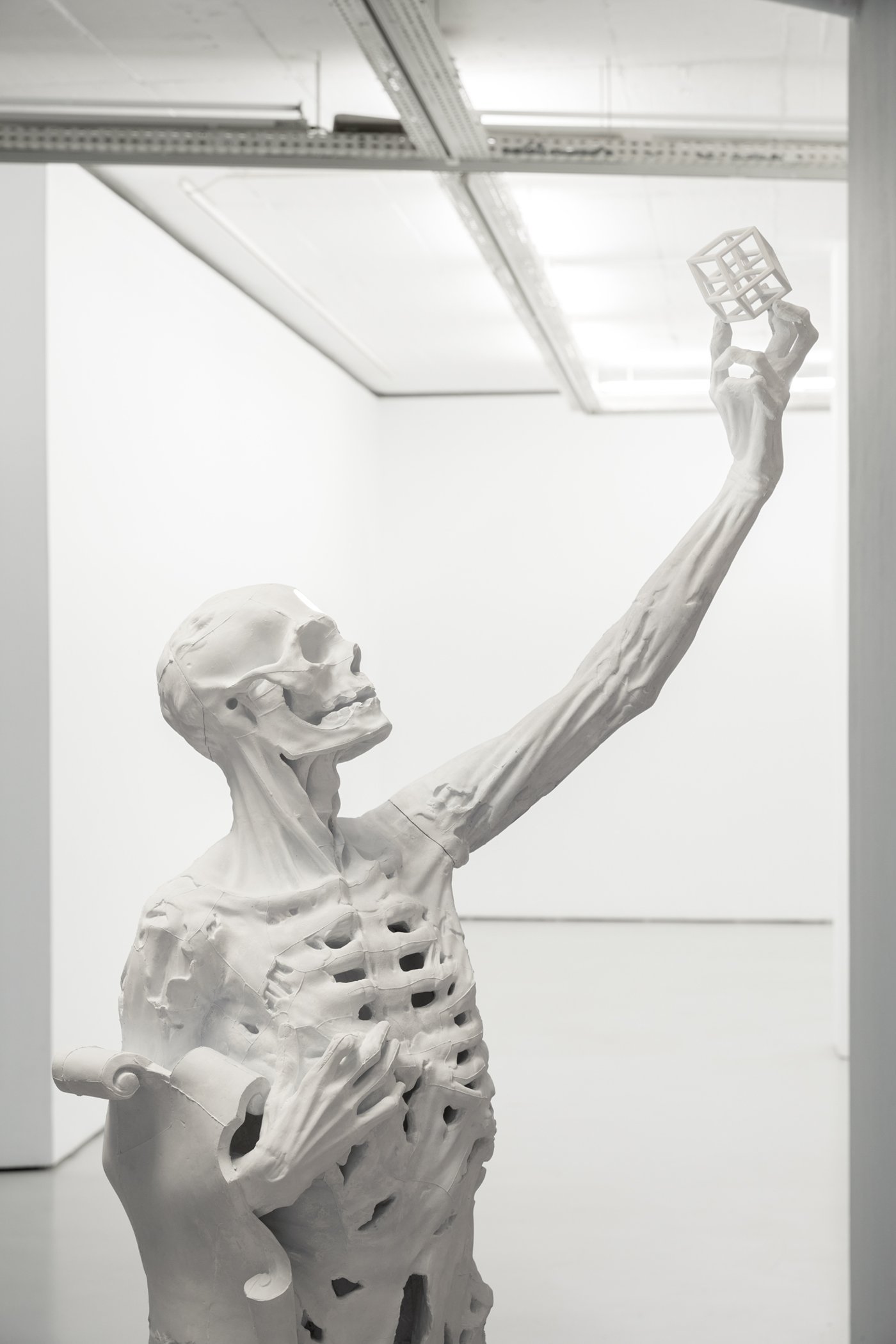 The title of Christian Andersson’s exhibition, What has yet to take shape will protect me, suggests a permanent tension between different registers of a constantly updated memory (sometimes pierced by an aura of melancholy) and their projection on the temporal flow we experience — on the brevity of the present. Cache, one of the series on display, is an example of this process, akin to an editing or montage methodology developed by Andersson, which is structural to his work. This series explores an analogy between one type of computer memory, cache, a system that allows faster access to strings of data that are used more often, and the complexity of the different kinds of human memory, such as implicit memory (unconscious) or explicit and conscious memory. Based on this principle, the artist introduces a process of layering the image that, at first glance, appears to be a collage or an overlay but is instead a layered construction comprising multiple strata separated by Plexiglas planes. In other words, there is a space between each fragment, and thus a slight temporal gap that subjects the observer’s gaze to a permanent reconstruction; a continuous editing and reconfiguring that anticipates a probable final form, which is in a constant transitory flow that refers to the exhibition’s title.

This series of works represents a dialectical relationship between images from different historical times, such as the figure of Nike — the goddess of victory from Greek mythology — in a science fiction setting; or Michelangelo Buonarroti’s sculpture, Hercules and Cacus over a landscape of swirling clouds attributed to the take-off of one of the Apollo spacecraft in the 1960s. Or even the near cinematic construction that embodies the optical illusion created by Escher (Maurits Cornelis Escher, 1898-1972), appropriating the image of his Drawing Hands (1948) through a process of repetition, overlapping, and transparency, mounted in different positions between the thickness of three layers of acrylic, thus changing the perception of the original figure. The juxtaposition of the two similar images creates a replica identical to the image in the foreground but different in its added dimension. In the montage, this relationship can be seen as an allusion to the fantasy of the historical repetition of events, which will always remain paradoxical because there’s no repetition of time. In this concoction of historical references, images, and signs that emerge from the artist’s seemingly random archive, two categories prevail that contaminate each other without merging: the imaginary that is common and present to us and the historical correlate of human experience. In the first of these categories, we recognise a close connection to the representation of the body, a gestural and sensual cut-out body whose arms denote the last moment of its creation. The second category calls for a questioning of the expression of human knowledge shaped by science, technique, and its various devices, such as measuring instruments, spacecraft, refrigeration chambers used in medicine and biology, or architectures and utopian representations. In Christian Andersson’s work, mechanical, mathematical, luminous, or vitreous devices related to the reproduction of images constitute an essential part of the spectrum of his plastic and conceptual language. The artist uses these devices to reconfigure our perception and create a play between three-dimensionality and the plane to produce an image that is a simulacrum of itself, recalling Baudrillard.

This contingent and disruptive event creates greater physical and spatial tension when one experiences it while observing the sculptural works in the exhibition. For example, in the installation Primer a machine — an ordinary printer — was manipulated by the artist’s hands and placed in a set design of black mirrors. Seemingly floating, it becomes a paradoxical double object that duplicates (mirrors) the exhibition room and the spectator’s body. The memory of the utilitarian object, of Duchampian lineage, transforms and becomes present as a mechanical/animal body, hybrid and marked by human action, from which anything visceral can emerge or, on the contrary, this corporeality, now undefined, is also subject to the action of another external body. This object’s modification is verified in the alteration of the spectator’s perception and the presence, not always visible, of hands, arms, and gestures that run through the entire exhibition, sometimes suggested or intuited.

The work Marrow, a human-scale plaster sculpture, is a copy of an original work, a late Gothic funerary sculpture, Transi by René de Chalon, in the Church of Saint Etienne, Bar-le-Duc, France. A memento mori, the work represents the disintegration of a corpse, flesh to dust, and alludes to the fleetingness of life. With the following two actions Andersson made a subtle intervention on the copy: first by adding a small tesseract, a hypercube, extended into the fourth dimension, on the raised hand; second by projecting this geometric figure’s image on the wall. This projection is an aesthetic transformation that operates in the dimensions of space and time, a representation of death or a coming back to life that is made present by the figure’s gesture and attentive eye. Projecting its beam, the light inside the sculpture’s head constructs an immaterial object, the shadow of an arm that now holds a cube in its hand; a four-dimensional shape is now being transformed into an image. The sculpture comprises the body and its projection, with a cinematic dimension, a possibility of tromp-l’oeil, which can convey in its entirety a melancholy feeling reminiscent of Durer or Kiefer. But also another allusion, with anthropological undertones, to the contingent and unknowable dimension of our physical presence in the shared space and the consequent actions that are inherent to it. These actions are a metaphor for human relationships in all their constitutive and imperceptible aspects and challenge the theories of Edward T. Hall, expressed in his book The Hidden Dimension.

In this relationship of images of the body with other images, sometimes spectral or others that we do not immediately identify, Christian Andersson plays with our vernacular memory, which we use to identify familiar events and situations. However, these images are worked in two or three dimensions and constitute meta-narratives anchored in edited and reconstructed fragments as if they were sculptures. One can see this in the work Atomizer, a sculpture whose vertical axis is also the figure’s support (beam) represented in the photograph, with arms and hands that suggest a centrifugal force. The piece may very well refer to an exercise of balance on a dance pole in which the body is made present and recognisable at the limit of its representation, like a still life, on the background image of a stereoscopic view of the universe.

An immense, infinite, and deep sky proposes a subtle reflection on the idea of landscape without being taken hostage by the dimensions of space and time, in which the body, as an ontological possibility, is still a question mark.