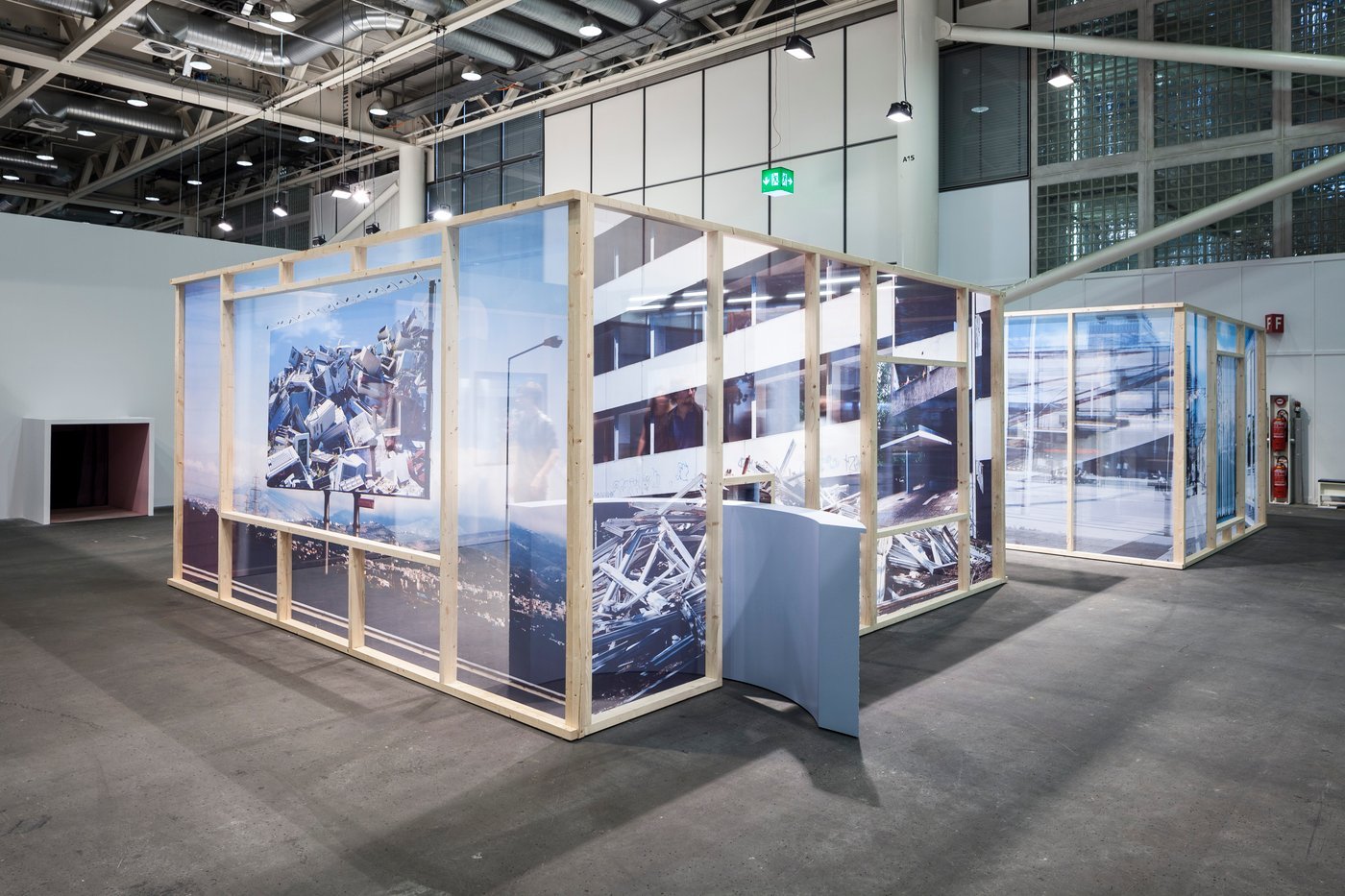 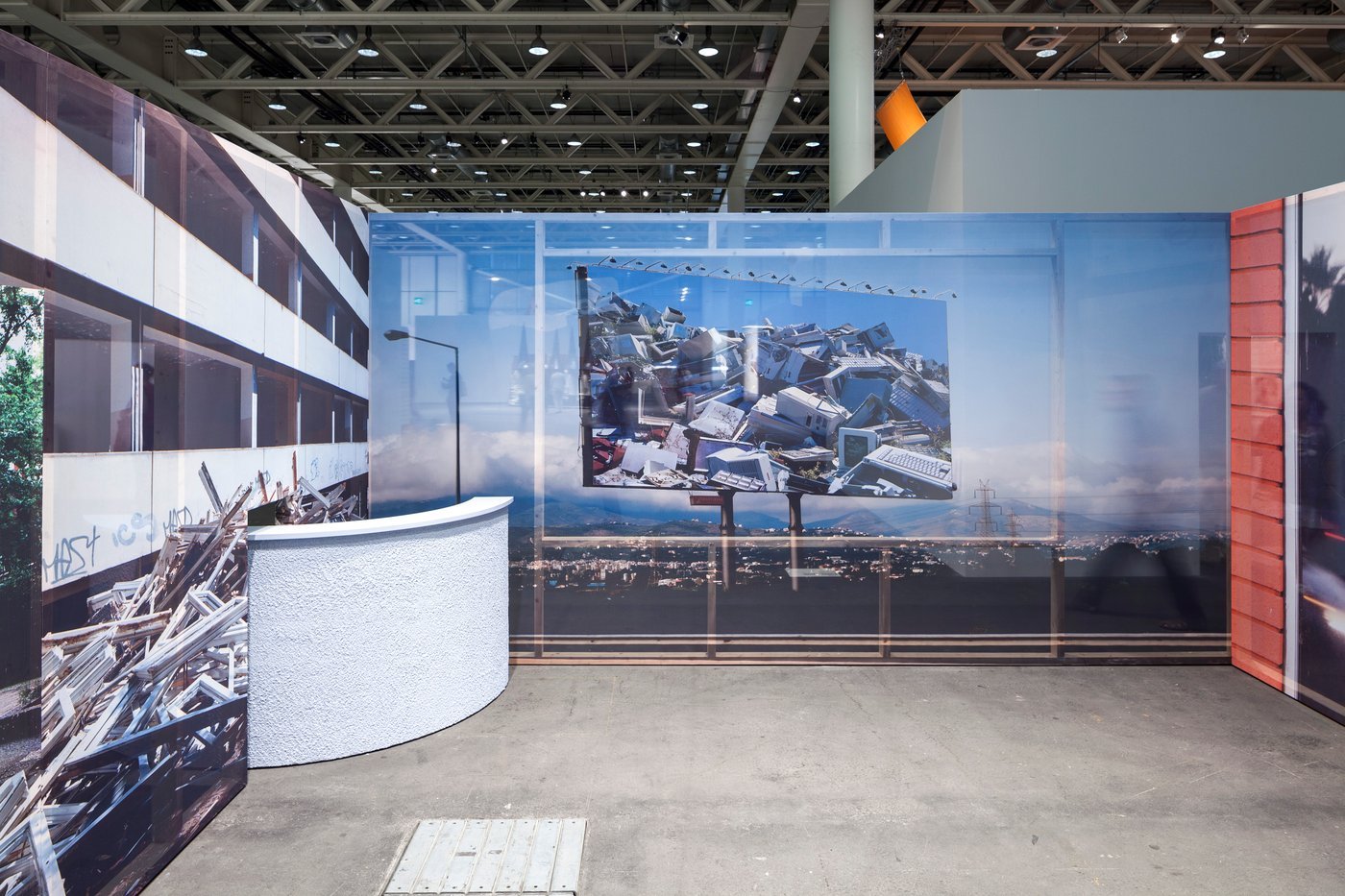 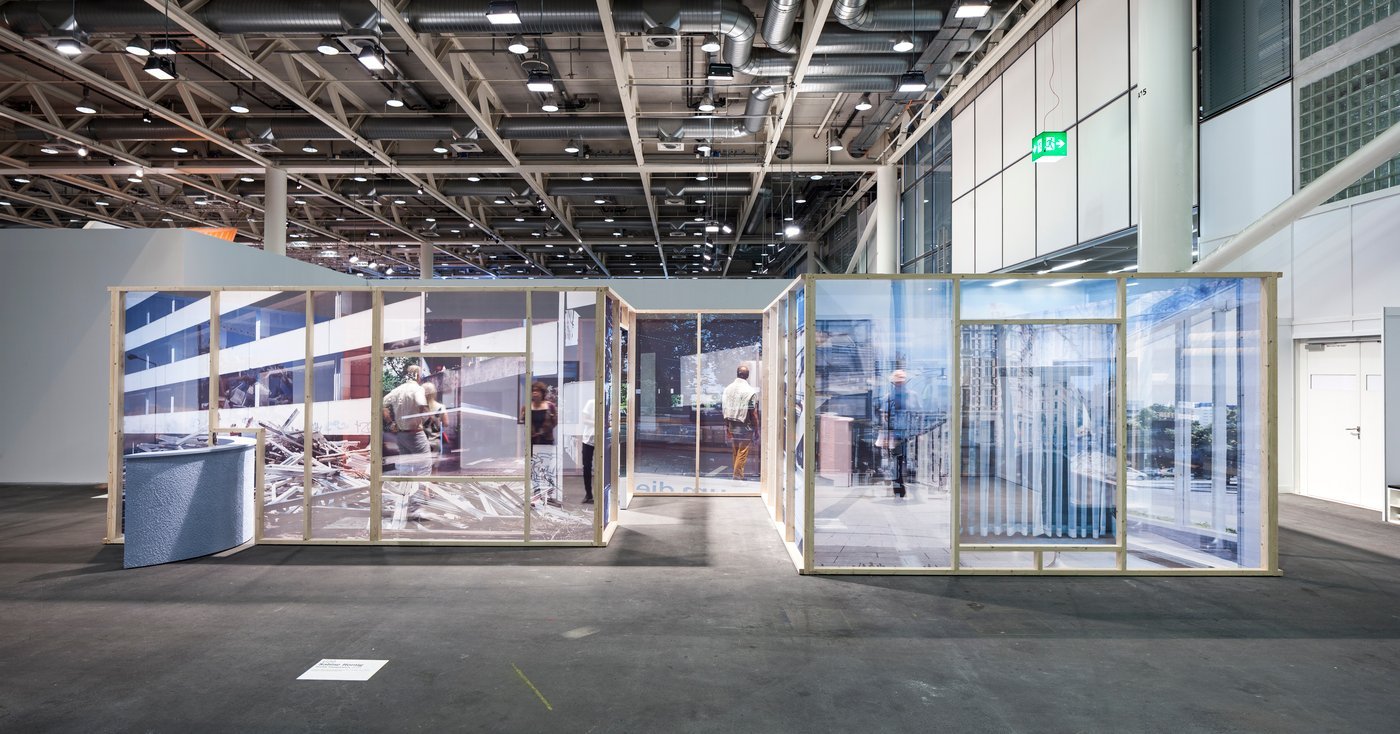 Double Transparency is a freestanding traversable structure of 12 wood frames spanned with transparent printed fabric to form a room-like enclosure. Three sculptural elements are interspersed throughout the installation.

The fabric prints are delicate, like fleeting reflections on glass. But there is no glass here and these are printed re-flections.

The transparency of the work connotes high tech architecture and mediality, but also, figuratively speaking, the act of seeing through: the pervasive superimposition of images and information that can no longer be viewed independently of each other.

The frames and the pieces built of simple materials (wood, fabric, plaster) form an analogue, tactile, and technically straightforward counterpart to these veiled layers.

The rough stucco surfaces of the sculptural elements are suggestive of exterior facades, but also interior walls, a reversal that flips the space inside out. The focus here is on materiality vs.immateriality, tactile confrontation vs. expansiveness. They also allude to the scattered debris of architectural modernism.

The street scenes and interiors recall spaces familiar from art history: the still lifes and interiors stored in the pictorial archives of the mind. But the scenarios are taken from unremarkable places on the periphery of attention, such as abandoned lots and construction sites. The photos differ greatly in scale, showing enlarged details and reductions chosen from the artist’s archives. They alternate haphazardly: some are finished works, others notes for future compositions.

Today, the theme of transparency is discussed in the media as though it applies to physical space. With the wealth of competing simultaneous images and an over-load of information, the old predominant hierarchies in selectivity have been subverted.

The ensuing struggle for spatial orientation is echoed here in the changing perspectives and points of view.

In earlier works Sabine Hornig referred to the metaphysics of memory, as in Nabakov’s novel Transparent Things, in which the object is viewed through to its origin in time. With the overlapping of transparent layers in varying perspectives, the viewer

is literally woven into alternating modes of past and present in an elusive and fluctuating space, a spatio-temporal continuum.

¹Double Transparency is Sabine Hornig’s most recent installation and was originally created for Sensory Spaces, a series

Her work has been exhibited in institutions such as: J. Paul Getty Museum in Los Angeles, (2013), Pinakothek der Moderne

and Sculpture Garden in Washing-ton D.C., The Pinakothek der Moderne in Munich, The Museum of Modern Art in N.Y.,